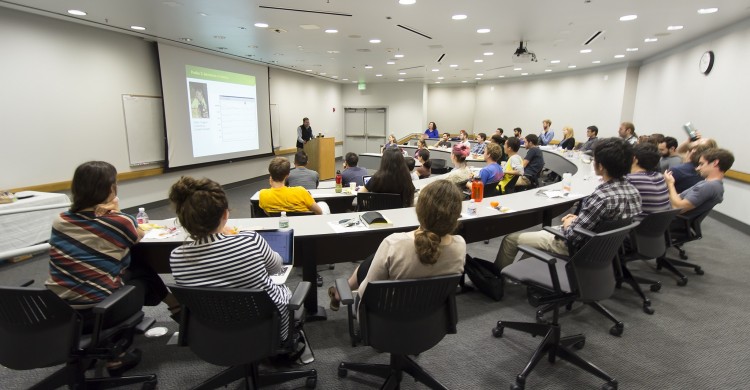 Scott Baker drives research on fungus at the Environmental Molecular Sciences Laboratory (EMSL), an arm of the Pacific Northwest National Lab (PNNL). As a Science Theme Lead in Biosystem Dynamics and Design, his big-picture goal is to improve biofuels and bioproducts. Before joining PNNL, he completed his Ph.D. at Northwestern University and did postdocs at University of Arizona and Syngenta, a biotech company in San Diego. He spoke to students at UCSB on October 18, 2016.

A Twenty-year Path to the National Lab

During graduate school, Baker focused on hemidesmosomes, small structures that play a role in epidermal cell adhesion. He balanced his research with time outside of lab, exploring the rich live music scene of Chicago. He encouraged a balance of scientific and personal activities during graduate school: “You should be having fun! If you’re not, go have some fun!”

After finding that he liked biological research as well as the community of educated researchers, Baker began his first postdoc at University of Arizona. There, he used genetic screening to study cell adhesion in drosophilia. Studying fruit flies eventually tested his patience, but the genomic component of his work appealed to him. He looked for opportunities to continue genomic work as he and his wife moved to San Diego for her graduate work.

He next began his second postdoc at Syngenta, a biotech company formed from the union of Novartis’s agricultural discovery institute, and Zeneca’s agricultural arm. The initial funding scheme for Syngenta was a lush $60 million annual budget for 60 employees, and Baker happily learned programming for genomics. He became a staff scientist and enjoyed working with fungi. After watching Diversa buy Syngenta and reorganize the company, Baker applied for a job at Pacific Northwest National Lab, where he has been ever since.

When Baker first began his scientific career, he could not have predicted that he would eventually gravitate toward the field of fungi. His interests continued to change and develop throughout his graduate training and even during his postdocs. After his first postdoc, he even considered leaving science to explore options in business. He found he liked the proteomics and genomics approaches that fungus research required, as well as the research community. Ultimately, this fit of culture as well as subject has made it much easier for him to forge a career in this area.

Baker encouraged getting involved in the national or international research society associated with your research area, because in the end, “if you have colleagues you like, science is a lot more fun.” In his case, creating international connections has benefitted his research collaborations and helped him maintain interest in his field.

Life at a National Lab

National labs are built for big projects, and necessarily have different budgets than universities. EMSL, Baker’s division at PNNL, is supported by soft money from the the Department of Energy, so the funding they receive is project-based and temporary. Although working with this funding structure requires some level of comfort with uncertainty, Baker pointed out that most lead scientists at PNNL only hire postdocs if they have funding to pay a new hire for at least a year or more. If funding sources dry up, national lab employees are often able to switch projects. One upside to this funding structure is simpler travel/reimbursement policies. Additionally, as government contractors, employees are not required to be U.S. citizens. Project-based funding requires tracking time, but the work culture is reasonable and fairly flexible.

To Baker, one of the main benefits of working at the a national lab is the opportunity to do team science. Researchers with a breadth of interests can approach a variety of projects at a national lab, and working well with others will make this easier and more productive. Many people stay at PNNL from their postdoc through their entire career.

Scientific publication at national labs depends on the nature of the work. Although scientists working on projects for national security cannot publish their end results, they often are able to publish proof of concept work.

Beyond Academia Panel on Careers at National Lab