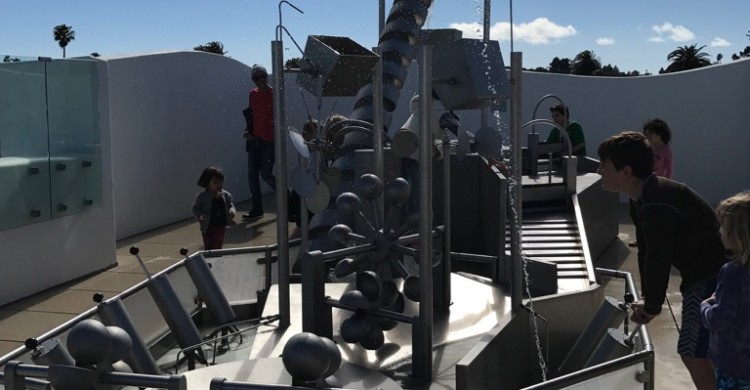 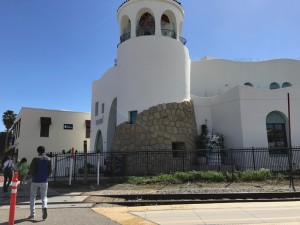 This past Sunday several UCSB graduate students and alumni (including myself) explored the wonders of the Wolf Museum of Exploration + Innovation (aka the MOXI). After our visit, I have no doubt that the MOXI is achieving its mission “to ignite learning through interactive experiences in science and creativity.” 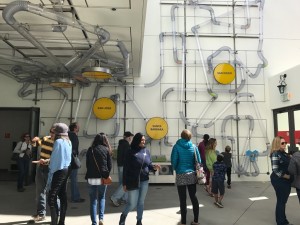 As we walked up to the front doors, multiple children were begging their parents to stay just a little longer with at least three active temper tantrums in the lobby. In fact, the MOXI was so popular on a Sunday afternoon that they were at capacity when we arrived, and as a result we had to wait 45 minutes before entering. Nonetheless, it was worth the short wait for a fun-filled afternoon.

The Foley Studios allows you to create our own soundtrack to a clip from the movie Ice Age. The exhibit walks you through the sounds you need to generate and is stocked with a range of random objects. Spoiler alert: it was tough. (http://youtu.be/IZlRVirCetU). On the same floor is the Reactable, which is sort of a block controlled digital turntable. The MOXI Reactable is limited, but you can use more complex sounds to make “music”. (https://www.youtube.com/channel/UCg7CNg908MGswPDLFz9hfAw) 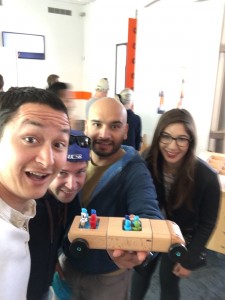 The Speed Track has some exhilarating exhibits. A few Bren students decided to beat all the children on the racetrack. We opted for beating the hangtime of every kid on the floor at a different exhibit. While not a vertical jump like the MOXI exhibit, here is an interesting TED-ed video on the math behind the extraordinary hang time of the greatest of all time (aka the GOAT). On this floor, you can also find Mindball.  Two people compete against each other to “push” a metal ball into their opponent’s goal. The game apparently works by measuring specific electrical frequencies from your brain. However, you need to be more calm to win, as it measures frequencies generally produced in a calm state of mind. I am not entirely convinced it works, but it is undoubtedly entertaining. 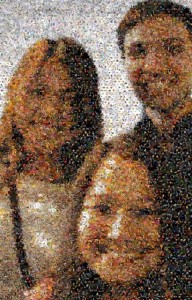 Mosaic Groupie of Emre with Jordan Ko and Sabrina Liu.

Unfortunately, the Interactive Media Track which features an installment by UCSB’s AlloSphere Research Group was not open the day we visited. At least there was an amazing view of Santa Barbara in the Sky Garden as the MOXI is one of the taller buildings Downtown. The Lookout has several observation scopes as well as a monitor for two mounted FLIR infrared cameras that overlook the intersection of Yanonali and State.

The MOXI is an excellent weekend destination with friends and family, filled with interactive exhibits that will engage your curiosity and imagination. Don’t take my word for it, go explore it yourself. No trip is complete without photo evidence so make sure to take a mosaic selfie before you leave.