In light of recent events concerning United States Immigration policy, I would like to share the story of my good friend, Emre Discekici, who is also our GSDS Lecture Series Director at UCSB. Emre is a second generation American and an outstanding graduate student in the chemistry department.

Emre hanging out with his parents, Haluk and Yasuko.

He was born in southern Illinois to a Turkish father and Japanese mother. Both his parents immigrated to the United States for graduate school, and by the time of their graduation had two children, Emre and his sister. After completing their degrees, they both found employment at the University of Guam, and made the difficult decision to leave the United States for Guam when Emre was three.

“I remember it being very hot and any time there was a typhoon, it was pretty scary. There were lots of stray animals everywhere. There’s one part of the island that had nice hotels, but that area was always filled with vacationers and tourists.”

Emre and his family were in Guam for about 7 years, during which he attended public school from kindergarten through 4th grade. Due to inadequate resources, the public school system generally struggled to provide a proper education for its students.1 In order to give their children the opportunity for a better education, his parents made the decision to temporarily separate the family and leave their jobs in Guam.

Adjusting to a New Country in Elementary School

At 10 years old, Emre moved to Chicago with his father and sister to stay with his Aunt. His mother stayed behind in Guam for a short time to provide financial support while his father searched for employment. His father eventually found a job in the suburbs of Chicago and worked to quickly secure independent housing for the family. Soon after, Emre’s mother left her position as a professor at the University of Guam and reunited with her family. Emre continued his education in suburban Chicago.

Adjusting to a new school in a new country can be a challenge for a 10-year-old. It has been shown that having a sense of belonging in school is crucial in combating feelings of isolation, and is predictive of positive academic outcomes.2 Coming from a new place, Emre did not have many friends. In addition, the comparative lack of quality education in Guam resulted in Emre feeling behind all the other students in 5th grade. His initial struggles to keep up with the curriculum made him feel isolated and insecure about his academic abilities. Ultimately it was his parents that helped him through this tough period of adjustment.

“Instead of searching for a full-time job, my mom helped me an enormous amount with trying to get me up to speed with all the other kids. I remember working with her going through different textbooks studying subjects from writing to math.”

Seizing the Opportunity of a Good Education

Emre’s family moved again and he attended a middle school separate from all of his 5th grade classmates. Though he was not completely confident in his academic ability, by the time he started high school, his friends and family helped foster a sense of belonging. Combined with a humble personality, Emre gained an appreciation for the opportunity of a good education, that his parents had given him and his sister.  He recognized the tremendous sacrifices they made, and his intense work ethic is a direct result of how fortunate he feels to have been given this opportunity.

“I want to carry that philosophy on through the rest of my career because I could’ve just as easily not been given the incredible opportunity to go to school in the United States.”

Undergraduate Study in Chemistry and Japanese

Emre attended the University of Illinois at Urbana Champaign where he double majored in Chemistry and Japanese.3 Emre was inspired by his father, who has a master’s degree in Agricultural Science, to pursue a major in a scientific discipline. He worked under Prof. Jeffrey Moore as an undergraduate researcher working in synthetic organic chemistry. His mother inspired him to pursue Japanese as a second major. It also helped him get in touch with his Japanese heritage. During his undergraduate education he was also able to study abroad in Japan.  Unfortunately, his trip was cut short by the 2011 earthquake.

“Illinois immediately contacted me informing me that I had to come home. I returned to campus with a new found appreciation for everything that was around me, because only in Japan had it occurred to me that it could be all washed away in a matter of minutes. I was extremely fortunate to come away from such a major natural disaster unharmed.”

Upon returning to Illinois, Emre organized aid fundraisers to help those directly affected by the disaster. He also worked as a translator/subtitle writer for a documentary to raise awareness on the aftermath of one of the worst natural disasters in recorded history. Emre was determined to return to Japan to reconnect with the people he developed relationships with and left behind so abruptly. In the summer after graduating from UIUC he was able to return to Japan as a researcher at the University of Tokyo.4 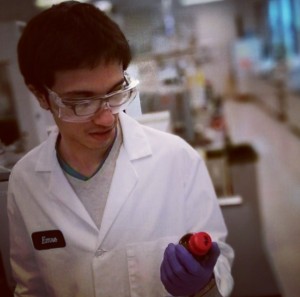 Working in the Chemical Industry and Arriving at UCSB

After returning to the United States, Emre was motivated to find work in the chemical industry to apply what he had learned in school and also to earn money to pay off his student loans. He initially worked at PepsiCo before moving to the Dow Chemical Company.  During his time as an undergraduate researcher, Emre knew he would eventually want to return to school for a graduate degree. He first learned about UCSB while at Dow.

“After doing some research and talking to former students of my current advisors Professors. Hawker and Read de Alaniz, I knew it was my dream school. Finding out I got accepted to UCSB and received an NSF fellowship was one of the happiest moments of my life.”

Emre snowboarding in Mammoth with friends from UCSB.

Hoping to Open Opportunities for Others One Day

Emre has had an extraordinary journey thus far. Having been given the opportunity to go from the Guam public school system to one of the best research institutions in the world here at UCSB made him realize that working hard indeed plays a large role in achieving your dreams, but you still need to be given the opportunity to work hard. He truly believes his parents’ hard work gave him the chance to be successful and pursue his own happiness.

“I want to continue doing science and I hope one day I can make enough to give back to either Illinois or UCSB in the form of a scholarship. I want to give underprivileged students a chance at school. I was so fortunate to be given a chance to go to school and work hard, and at times I feel like I couldn’t be any luckier. It’s all about taking advantage of the opportunities you are given. If I could somehow do that for at least one other future aspiring scientist, it would make me really happy. This means a lot to me only because I feel like I was given that chance, when it could’ve very easily gone the other way.”