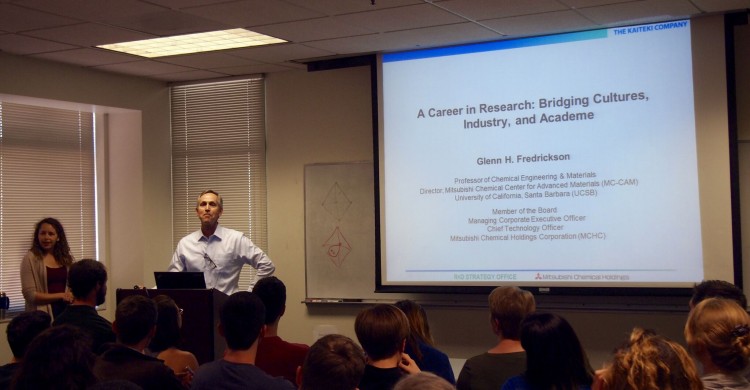 Dr. Glenn Fredrickson has uniquely and successfully merged academic research with industrial involvement. To him, he said, this progression was natural. He began in an area of basic research that was interesting to him, studying the theoretical underpinnings of complex fluids and polymer structure-property relationships. After completing his PhD at Stanford, the opportunity to focus on pure research drew him to Bell Labs. He next began a tenured professorship at UCSB, where he continues to teach and advise students.

In his first few years as a faculty member, he realized he had developed expertise and perspective that could improve applications at chemical corporations, and begin to consult for industrial partners including Dow Chemical and 3M. Fruitful collaboration as the Founding Director of the Mitsubishi Chemical Center for Advanced Materials (MC-CAM) at UCSB paved the way for his leadership roles in R&D settings. He first served as executive director for the KAITEKI Institute in Japan, next moving into his current position as CTO for Mitsubishi Chemical Holdings Corporation in Japan.

As CTO for Mitsubishi Chemical Holdings, he will design an R&D organization for a $30 billion dollar company from scratch. In his own words, “it should be fun”. Mitsubishi Chemical Holdings is a company of 760 business units and 70,000 employees, with plants all over the world. These separate divisions address a range of markets, including drug discovery and clinical testing, high volume petrochemicals, and industrial materials. In order to orchestrate innovation across the corporation, Frederickson makes strategic decisions about management of resources, prioritization of goals, and ways to best drive innovation.

He spends about 3 days each month at Mitsubishi in Japan. The rest of the time, he communicates and strategizes remotely, working with a deputy in Japan who focuses on execution of goals full-time. In order to evaluate the performance and potential of Mitsubishi sites, he has visited plants on several continents and acquired business skills on the job, becoming familiar with balance sheets and financial reports. As he shared in his talk, each point in his career provided useful lessons for subsequent undertakings.

Be the best at your technology – foundational knowledge is indispensable
Frederickson built his academic career on research contributions in theoretical and computational polymer science, and this knowledge has served as a solid foundation for research as well as applications-based contributions in industry. Perhaps most importantly, his technical knowledge has delivered increasing returns over time. “Writing papers in graduate school is not hopeless,” he urged, pointing to a Physical Review Letter he published during graduate school which now has over 500 citations.

A professional network can create opportunities years later
After finishing his doctorate, Frederickson moved to AT&T Bell Labs in Murray Hill, New Jersey. At Bell Labs, he worked alongside experts in a diverse range of fields. Several of his colleagues at Bell Labs went on to faculty positions at UCSB or other universities, but others moved into industrial positions. Familiarity with contacts in industry led to a few early consulting jobs that helped him build a reputation, leading to more industrial projects.

Manage a portfolio of projects
The same way that a balanced investment portfolio can optimize risk and returns, sponsoring projects at different institutions can have great benefit. Frederickson suggested helping to manage projects at national labs or government research institutions in addition to a university or company. In his own career, playing a role in consulting work as well as academic work strengthened his industrial relationships and allowed him to learn new skills.

Cast a wide net when raising funds for projects
Raising money for research, whether it is corporate or academic, increasingly demands an entrepreneurial mindset. Frederickson challenged industrial scientists to co-author grants with academic or government collaborators, suggesting that efforts gain strength in this way.

Be on the lookout for new problems your technology could solve
Frederickson urged everyone in the audience to think innovatively about their own work. Finding new applications and opportunities should not be a task solely delegated to marketing or sales divisions. Scientists and engineers, who know their work better than anyone, can play a strong role in linking existing problems with the solutions they have devised.