Trisha Andrew speaks about her personal experiences in academia 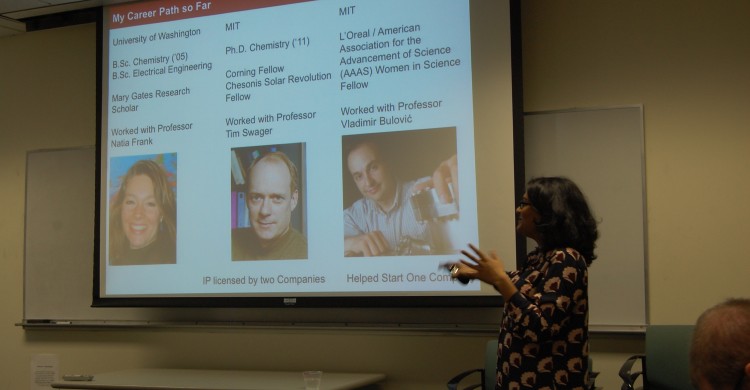 Trisha Andrew speaks about her personal experiences in academia

On February 12, 2016, Prof. Trisha Andrew gave her diversity talk on “Entering Academia in an Interdisciplinary Field” where she spoke to students about her personal experiences in academia. Prof. Andrew received her BSc in Chemistry and Electrical Engineering from the University of Washington and went on to get her PhD in Chemistry from MIT. She then went on to do a postdoc in another lab at MIT.  She is currently an Assistant Professor at the University of Wisconsin-Madison, where she’s held this position since 2012. Her diversity talk first described her journey into academia and followed with a Q&A session with the audience.

Trisha began her undergraduate research experience gassing fruit flies and collecting their ovaries. She then did a work study program where she ended up washing dishes in a chemistry lab, and eventually joined the chemistry lab of Natia Frank, where she began her interest in devices.

She did her graduate research with Tim Swager’s group at MIT, where she focused on designing and synthesizing organic chromophores for explosives detection, as well as a myriad of other projects. During her studies, she ended up helping start a company that eventually got bought out and the technology licensed. She then went on to do a post doc in the lab of Vladimir Bulovic, where she worked on solid state device physics.

During her postdoctoral training, Trisha was named one of five recipients of the 2011 L’Oreal USA Fellowships for Women in Science. Receiving this honor involved a ceremony at the US Senate. She described the excitement of bringing her parents to the Senate for this ceremony, 4 months after they had received US citizenship. Unlike other fellowships, the money is entirely the fellow’s. During her post-doc, she used her fellowship to purchase instrumentation, which she now has in her lab at UW-Madison.

After describing her career path, the floor was opened to the audience to ask questions. “Ask me anything,” Trisha said and gave a few example questions that ranged from career specifics to fashion. Listed below are some of the questions and paraphrased answers discussed:

Q: It seemed that you had a clear idea of going to med school. Did you know you wanted to go into academia?

A: I had a life changing conversation in a stairwell during Freshman year of undergrad with my honors general chemistry professor while he was in pontification mode, about how talented scientists should go into academia because he felt that “it’s selfish to go into industry.”  I had never thought of it that way. But no, I didn’t know. “No one in my family is an academic. It never occurred to me […] I liked research so much I chose to go to graduate school. I didn’t think I wanted to be a faculty member.” It was an unexpected thing that I transitioned from graduate school to a post doc.

A: “Hands off. Typically, my students don’t know where I am. They only know I’m at UCSB because they want edits on a manuscript.”

Q: What do you look for in your students?

A: Students from parochial chemistry backgrounds are typically unaware about devices, they usually want to make big molecules. It’s not effective to take students where I have to convince them of the research. I look for students who are self-motivated and decide for themselves that this research is interesting. They should be asking questions and engaging with my current students during their interviews.

Q: What were you looking for in a faculty position?

A: I chose Wisconsin because it had a feeling of collaboration. Everyone was open.

Q: How do you convince a university to have a multi/interdisciplinary program?

A:  The NIH has literature on how to make research interdisciplinary. It’s problem-driven research. “Focus on a problem and how to solve it. Interdisciplinary is secondary.”

Extra from Trisha: In addition to the NIH literature, this article from PNAS  is also a good read because it provides concrete data-based support for interdisciplinary, risky research. I like the article because it is a good potential reference to drop in faculty application packages and/or interviews to justify an ambitious and interdisciplinary research program

A: “You need peeps!” There are two other female professors and we care about our clothes. Having a preexisting squad made it okay to talk about our clothes and allows me to not to feel like I have to dress masculinely. Now I have conversations with 40-year old men about shoes.